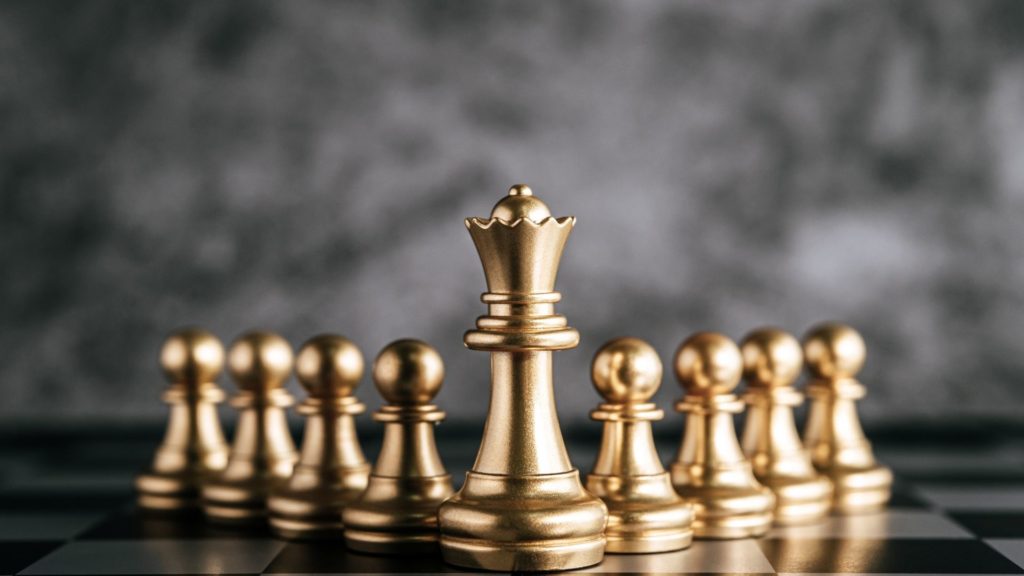 Leadership is essential for the proper functioning of an organization. It helps in strategizing and systematically carrying out all the tasks and duties. Except for this, goals are met timely, employee relations are maintained at a decent level.

These transformations are necessary for the growth of an organization and to sustain its position in the industry.

In their book, they have not explicitly emphasized on any particular leadership philosophy but focused on the personality of leaders and their management technique.

There are seven critical transformations in executive leadership competence today in the world. These transformations form the progressive stages in adult maturity, also referred to as Vertical Learning. It is in contrast to horizontal learning which takes place within a stage.

Rooke and Torbert have described the following seven leadership styles:

All these seven different leadership styles have been laid down, keeping in mind all sorts of leaders and their management styles.

Characteristics of Action Logics of Seven Transformations of Leadership 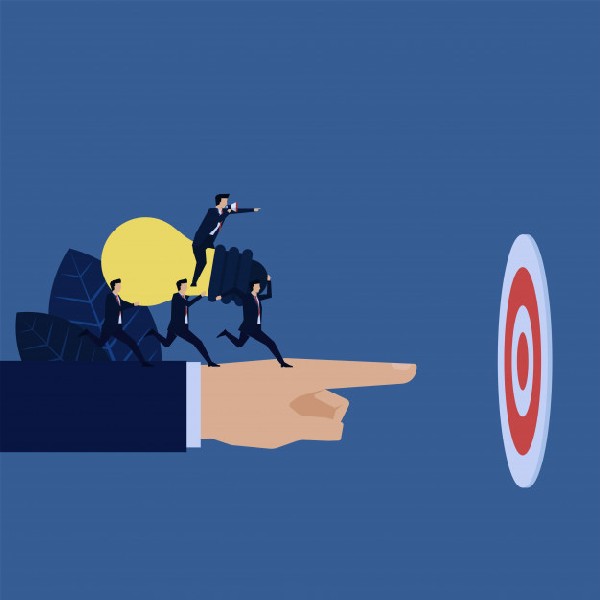 When talking about Opportunists, it is self-oriented. Here, it is inclined towards winning. “Wins any way possible” is the characteristics feature of this transformation. This logic somehow is only sound during emergencies. And in sales opportunities sometimes. Opportunities are all about finding a way and making things right.

Now talking about Diplomat, it obeys group norms. And, mostly avoids conflicts. This action logic is about gaining control of their behavior. And in the diplomatic philosophy, the leader gains more approval by just cooperating with the rules and stats of the group. Also, by performing his/her daily roles consistently. They are suitable for bringing people together.

Experts always rule by their applied logic and by their area of expertise. Instead of focusing on other matters, they go for rational decisions. It makes it more logical and appreciated. The strength of this action logic is acquired when the contribution is on an individual level instead of an entire group.

Achievers are those who meet strategic goals. They are well suited for management roles. They are goal and action-oriented. They are efficient in achieving goals as per their name. The achievers achieve goals and targets along with the team members.

Individuals, create unique structures to resolve the gaps between performance and strategies. The strength of this action logic is about consulting roles, and they are useful in the venture.

When talking about the transformational leader, the strategists are best. They generate organizational and personal transformations. They exercise the power of vigilance, vulnerability, and mutual inquiry. These strategists work in different aspects to transform the entire leadership work for both the short and long term.

Research on Seven Transformations of Leadership 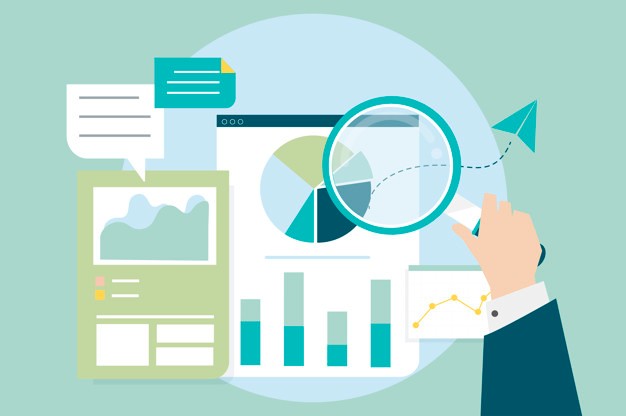 Rooke and Torbert researched 100 American and European businesses. It included thousands of managers who were surveyed on various parameters. Their research included all types of organizations, whether profitable or non-profitable and even included government bodies.

From the data extracted, it was seen that there are majorly three kinds of leaders who are related to lower than average performance. These are Opportunists, Diplomats, and Experts. The three groups comprised 55% of the sample.

Based on the study, this group was noticeably less effective and efficient when it narrowed down to the implementation of strategies within organizations. It was a steep 30% decline in comparison to the sample who were rated as Achievers.

The sample even showed that 15% of the managers were consistent and could continuously innovate. It often proved in the successful transformation of the organization.

These managers were none other than the Individualists, Strategists, and Alchemists.

The Seven Transformation of Leadership research conducted by Rooke and Torbert was based on a survey known as the ‘Leadership Development Profile’. The respondents were asked to complete some 36 sentences. It was observed that the responses generated were very diverse.

This exercise was conducted to help the evaluators understand how the respondents interpret their actions, their surroundings and the world around them. Based on this sentence completion method, the respondents could then be categorized.

This categorization was done on the grounds of their dominant style of thinking.

The categories were Opportunists, Diplomats, Experts, Achievers, Individualists, Strategists, or Alchemists, as mentioned before.

A more capable leader is bound to switch more between the different leadership styles. So, it was suggested by Rooke and Torbert to administer this test again after a few years.

The two authors mentioned action logic in their research. Action logic is a crucial aspect and is deliberated from a leader’s growth point of view. It is defined as how ‘leaders evaluate their behavior and that of others, and how they look after or preserve their power in the face of threats or difficulties.

From this, Rooke and Torbert concluded that the levels of company, leadership, and consequently individual performances depended and varied as per the action logic.

As the intensity of action logic increases, each stage goes one step further. A leader in an organization progresses better with more mature and productive action logic. The ideology behind it is to help leaders benefit from these seven action logics and get better and mold themselves as per the organization’s demands. It is majorly an evaluation technique.

It usually happens when a leader is delving into new interpersonal behavior, engages in new work relationships, or expands and magnifies work experience.

The Seven Transformation of Leadership Styles 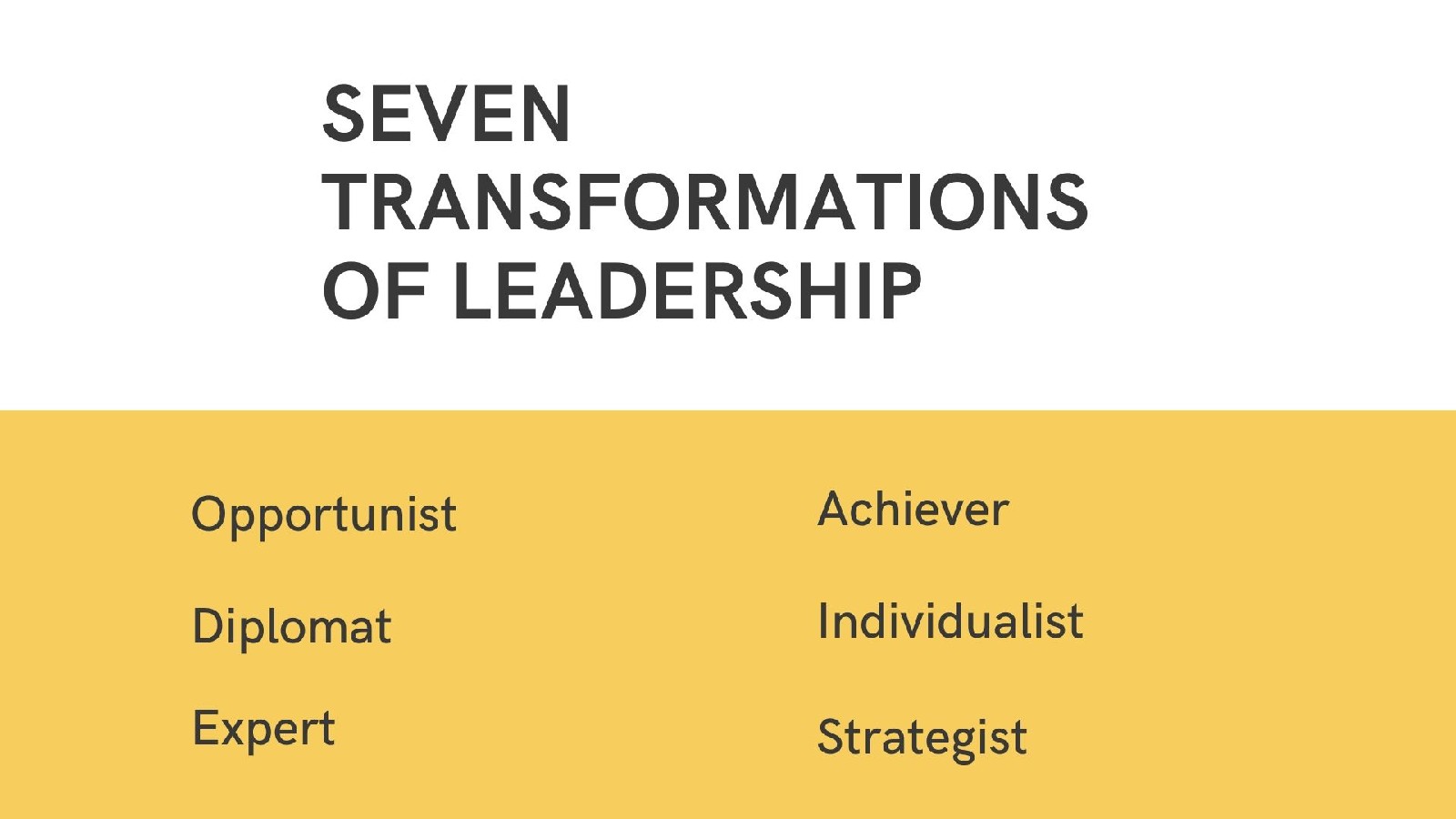 To get a better understanding of the category or level in which a leader belongs to, Rooke and Torbert devised various leadership styles to demarcate the different types of leaders and segregate them in the category that matches their traits. They referred to this as the Seven Transformations of Leadership.

The briefing will progress from the least productive or effective and least sophisticated styles to the most prolific and straightforward forms.

There are various levels that a leader can acquire. A more capable leader is eligible to acquire more leadership styles. The levels or categories that a leader can reach begin with the Opportunist that is at the lowest rung (position) and the Alchemist, at the top.

Based on the survey ‘Leadership Development Profile’, it can be concluded which of the seven styles is suitable for the leader.

The percentage compositions of all the seven leadership styles are as follows:

The Seven Transformations of Leadership

It is clear from the category what would be the approach of such a leader. A leader who follows this style has a single preferred method for excelling or winning, which makes them come across as manipulative. They tend to believe that their behavior is legitimate. Because of this, they do not give preference to feedback and even behave in vengeful ways.

Opportunists see everyone as their competitors.

Rooke and Torbert found that nearly 5% of the leaders surveyed belonged to this style.

A diplomat is a leader who prefers to avoid heated situations or conflicts. They come across as disciplined, trying to control their behavior and sticking by the norms. These leaders are loyal and act in the service of the team. It can prove to be a downfall since they try their best to be on good terms with everyone. As it turns out, a lot of people can be seen taking advantage of this.

A diplomat is not suited for upper management as an initiating charge is challenging for them. For diplomats, the study shows that about 12% of the respondents lie in this category.

Someone who lies in this category is converged on logic and expertise. An expert always demands rational explanations and efficiency of work. They desire to work alone and contribute significantly to the organization. It is the largest single category of leaders.

Experts make sure that their work is backed with airtight arguments and facts. Many IT professionals, accountants, and tax experts fall under this category. They keep looking for ways to improve, become more efficient, and attain perfection. As a result, they can be stubborn sometimes; for them, they are always correct.

The study showed that about 38% of the respondents found their place in this category.

A leader following this leadership style emphasizes on strategic goals and transforms them into effective goals for their group. With this sort of leadership style, leaders can support as well as challenge employees and value a healthy working environment.

Despite all this, Achievers find themselves stuck while dealing with complex matters. Thinking out of the box is not their forte. They are open to feedback to improve and solve problems in a better and creative way. F

The study indicated that nearly 30% of people who took the sentence method belonged in this category.

A person with this style can be seen in entrepreneurial or consultancy roles. Strategy and performance are of equal importance for an individualist. They manage to resolve any problem effortlessly. The individual contributes unique, practical ideas for the growth of the organization.

Depending on the situation, they are skilled to mold themselves accordingly. For individualists, potential conflicts are a source of excitement and creativity. They see it as an opportunity to develop. Studies showed that individualists occupy around 10% of the sample.

Organizational and Personal transformations are the main target of leaders following this style of leadership. They are observant and practice the strength of mutual and shared research. A strategist manages to take hold of distinct visions and has the skills to bring it all together.

They never back off from conflicts or behave reluctantly with people who have varied opinions. They are good at handling scenarios when employees are faced with change. About 4% of the respondents belong in this style of leadership.

It is the last style of leadership. It is known to be the most productive and straightforward ideology. One who follows this style can bring social transformations.

They know how to integrate social, material and spiritual changes and lead the community-wise transformation. An Alchemist has the capabilities to reinvent themselves as well as the organization in astonishing ways.

An Alchemist can deal with many situations at many levels. They mold themselves according to the circumstances. It is the reason why they are often referred to as chameleons. They hold the traits of being charismatic and serve as an example to the people or employees around them.

They comprise of only 1% in the entire sample.

Final Thoughts about the Seven Transformations of Leadership

To satisfy the needs and hunger of the world, it is necessary that we invest in stage leadership development or vertical learning, indulge more into those leadership styles that best suit the dynamics of the organization. Thus, proving to be beneficial.

Organizations can make substantial gains from Strategist or Alchemist styles of leadership.

Hence, as suggested by Rooke and Torbert, it is mandatory to keep testing leaders every few years to ensure that the leadership style fits in.

So, how effective do you consider the seven transformations of the leadership model ineffective and result-driven business management?

Do you think this kind of model can be productive in motivating your team towards accomplishing the goals? Share your views with us in the comments below.